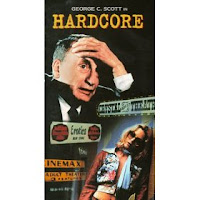 Hardcore writer-director Paul Schrader drew upon his own background growing up in the Dutch Reformed Church in Grand Rapids, Michigan. George C. Scott plays Jake, a pious middle-aged businessman with no wife and a teenage daughter. His daughter disappears on a church trip to a Calvinst youth convention in Southern California.

While Hardcore sure is gritty, it has some light comic moments, especially with Scott and Hubley together. The Calvinist background really develops Scott's character, who seems to have gone through a metamorphosis when relative Dick Sargeant tracks him down in LA.

Season Hubley, convincing here, would also play a very different kind of prostitute in 1982's Vice Squad, which I'll get to next ...
Posted by Michael at 8:05 AM