Not on DVD: Popsy Pop 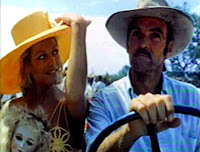 Popsy Pop (AKA Queen of Diamonds) is quite possibly the best Franco-Italian co-production shot on location in a Venezuelan mining town -- ever.
If you're a fan of low-budget international action, you will probably enjoy it, as Popsy Pop maxes out on its assets: Claudia Cardinale, Stanley Baker, a controversial author, and locations, especially the mining town.

The 1971 film was written by and co-stars Henri Charrière, then world-famous for writing Papillion, about his supposed escape from the notorious Devil's Island prison, located in nearby French Guyana. Like Mickey Spillane starring in I, The Jury, this movie features a famous author/character who probably has no business acting. Henri plays an old man out for one last score. He's not as bad as Spillane was -- the old man part is definitely convincing. Charrière is the main supporting player here, as Baker and Cardinale star.

The film opens with a voiceover intoning that the region at the Northern tip of South America is where most bad men go. Did not know that. A map of the region is next, with an animated arrow that shows the action taking place here (E. Venezuela), then here (Santo Domingo, aka Dominican Republic), and lastly here (Haiti). Just so you know, in advance. Will there be a quiz at the end of the movie?

The diamond mining town is lively, with hundreds of residents mixed in with Cardinal, Baker, Charrière, and a few supporting players. Baker is in charge of security for the mining company. Cardinale and Charrière arrive on a boat together, but pretend not to know each other once they arrive. Cardinale is brought in by the mining company to enterain the workers. She ingratiates herself immediately with Baker, who guards the diamonds.

Cardinale sports all kinds of ridiculously flashy outfits, whether working or not, at this filthy remote jungle outpost. When she performs at the local bar, she gives a three-minute Parisian show girl routine, with costumes and a song which regales Popsy Pop as the toast of Caracas. I kinda think the miners would have preferred a stripper, but since it's a movie they all go nuts for it. Then a fat lady comes out to sing and flaunt her huge ass, to even wider acclaim.

Aside from the catchy Popsy Pop theme, there is also a nice presumably Venezuelan theme, that is repeatedly "played" by two guys in blackface, wearing tuxes and carrying mandolins.

The mining town is suitably gritty and the hundreds of locals onscreen add some real atmosphere. Being a low-budget effort, much of this film is shot in natural light, and there is some nice location work here. The few interior scenes look they were either not lit or very poorly lit.

When we eventually get to Santo Domingo and Haiti, we also get an intersting new character, a preacher/voodoo/huckster who might also be a diamond fence. He leads a strange cult that seems to only attract women. Plus he sings spirituals in a rich baritone, and plays the organ.

The print I saw (retitled "Queen of Diamonds") had a rather abrupt cut in the ending scene. I'm thinking there is probably another version with a different outcome.

This is a pretty minor entry for Cardinale, who worked with Fellini, Leone and Herzog. Having entered the business after winning a beuaty pageant, she's custom-made for the role of Popsy Pop. My favorite outfits: the yellow sundress, the Popsy Pop costume with the male backup dancers sewn into it, and the electric blue glam mini-dress with matching leg-strapped boots. While eye candy is part of the role, Cardinale is a capable actress who get the best role as the clever Popsy Pop easily outwits man after man.

Baker, a respected British star who mainly played villains, really isn't given much to work with here, but plays his role with authority. He doesn't get to wear any kicky outfits.

Definitely worth a look if you can find it.
Posted by Michael at 8:26 AM

Labels: Not on DVD

Anyone know where I can get a copy of this film? Tried all the usual sources already. Any suggestions would be great.

I found a VHS copy on eBay, under an alternated title.