Not on DVD: Tuxedo Warrior 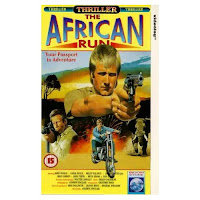 ... all in one remarkably terrible, yet fairly entertaining, film, Tuxedo Warrior (aka The Africa Run aka The Omega Connection)

John Wyman is Cliff, a fallen engineer who now runs a seedy bar near Victoria Falls in Zimbabwe, with illegal gambling in the back. He wears a white linen jacket at all times, and yes, Holly Palance does actually call him "Tuxedo Warrior."

Carol Royle is Lisa, a lady with a gambling addiction, on the run with her husband (John Terry, from Hawk the Slayer), who has stolen to feed her habit. Of all the lousy joints in the world, she has to walk in to the Omega, run by her former lover Cliff. She and hubby need Cliff to help them get across the border. I don't know, kind of reminds me of some other movie ...

The Casablanca love story plot is exploited to give us all manner of ridiculous flashbacks of Cliff and Lisa set to syrupy soap opera style music. But the dialouge is even more sacharine:

It is tough to be too critical of the actors with such a bad script.

The diamond thieves action subplot is more fun. They're trying to escape into Zimbabwe with stolen jewels. Young James Coburn Jr. re-steals the stolen jewels, with angry former partners in hot pursuit. Of course they end up at the Omega, where kung fu ensues. Best of all, a couple of sticks are taken off the wall in the middle of fight, and Escrima (Filipino stick fighting) happens -- in Zimbabwe. Actually the fight scenes are by far the best part of this movie.

The end of British colonialism is also mined for effect, with stalwart Ken Gampu playing the new police inspector about to take over from a Brit expatriate. Cliff admits that he likes Africa the way it used to be. The white police inspector complains that the motherland doesn't want the expats back. Are white colonials the target audience?

This movie marks the beginning of Cliff Twemlow's brief yet fascinating film career. Twemlow did not write this movie, but the title is borrowed from his memoir, an account of his days as a bouncer in Manchester. Twemlow has a supporting role here as Chaser, a thug working for gambling interests, and for himself. The title, and fights and stunts, which Twemlow coordinated, are really the best things about this film. Over the next decade, Twemlow went on a b-movie binge, starring in and writing a string of low-budget actioners that have achieved minor cult status.
He also did the music for Tuxedo Warrior and all his other films.

Twemlow died in 1993 at age 59. While none of his films are available on DVD, it kind of makes him an appealing cult movie figure, doesn't it?
Posted by Michael at 10:04 PM

So when do we see this movie?

It's Not on DVD, anonymous. So good luck!